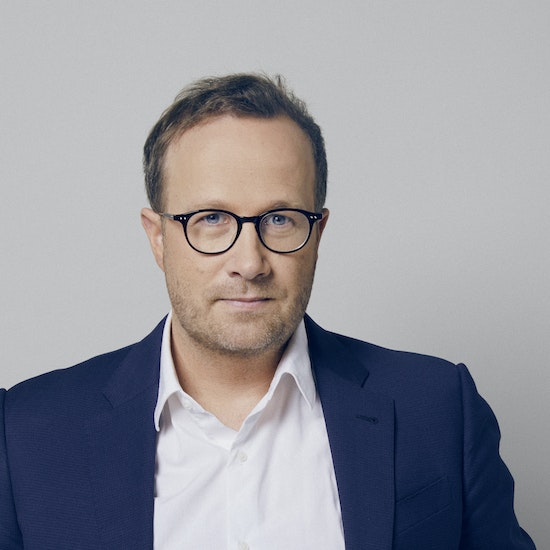 Andri Snær Magnason is an Icelandic writer and a father of four. His books and plays are published or performed in more than 40 languages. His newest book, On Time and Water, is a work of narrative nonfiction, a tale of glaciers, grandmothers and holy cows, an attempt to grasp the issue of climate change through science, mythology and personal stories.

Magnason works in many art forms and genres, sometimes surprising his audience as he switches from poetry to children’s literature to science fiction to nonfiction. His children’s books, The Story of the Blue Planet and The Casket of Time , both winners of the Green Earth Book Award, have been used in hundreds of schools worldwide to teach environmental philosophy through play and storytelling.

In Dreamland, a Self-Help Manual for a Frightened Nation, he stepped forth as an activist, defending the highlands of Iceland from being drowned behind big dams to sell cheap energy to aluminum smelters. He also codirected the documentary film Dreamland.

Magnason has won the Icelandic Literary Award in all categories, the Philip K. Dick Honorary Mention for LoveStar and Children’s Book of the Year in China. He has recently finished a feature length documentary film, The Hero’s Journey to the Third Pole — a Bipolar Musical Documentary with Elephants, and is working on an other, Apausalypse, looking into the great pause we are currently living in.